Kids pushing their parents for the coolest in back-to-school gear is a late-summer tradition, and today, youngsters have some backup: social media influencers.

Peer and social media influences on children are not news unto themselves, but it turns out these factors are affecting how parents spend their back-to-school dollars, according to a new NerdWallet survey conducted online by The Harris Poll.

The online survey included 2,010 U.S. adults, among whom 595 are parents of kids in kindergarten through college. Of those parents, at least 6 in 10 say their children are influenced by peers or social media when making their back-to-school wishlist. And about half of these parents (51%) say they typically end up buying back-to-school products their kids want because of these influences.

“The whole notion of ‘Keeping up with the Joneses’ is amplified on social media, with an entire army of influencers telling your child what they ‘need’ to have this year. That can make back-to-school shopping a real headache,” says NerdWallet personal finance expert, Kelsey Sheehy. “Ease the pressure by having a plan in place before you get started. You can even turn it into a learning opportunity and involve your child in the process so they can learn to prioritize and work within a budget.”

Here’s how parents are thinking about their back-to-school shopping lists, along with some tips on how to manage the costs and potential frustrations.

Note: Throughout this report, unless otherwise noted, “parents” refers to parents with children in kindergarten through college.

At least 6 in 10 parents say their children are influenced by social media (60%) and friends (67%) on what to buy for back-to-school. In turn, the kids pass the pressure on to parents. Just over half (52%) of parents with children in school say they feel pressured by their kids to purchase supplies and/or apparel, even if they cost more than they’d normally want to spend, and 51% say they usually end up buying the products their kids want because of influence from others.

Back-to-school shopping tip 1: Share the list and a budget with your child. You have a list of things your child needs and likely can’t indulge every whim on brand names and costly designs. Helping your child understand this upfront can save you from an argument in the store and can impart a useful lesson in personal finance. By setting a dollar limit before the shopping begins, you can avoid the exasperation of being pressured into a pair of sneakers that eats into the money for notebooks and pencils.

Parents can’t blame all of their overspending on pressure from their children, however. Nearly all of those who shopped likely overspent last year, and they may be setting themselves up for failure again this year.

Over 9 in 10 parents (93%) who did back-to-school shopping last year splurged, but only 50% who plan to shop this year say they’ll likely splurge, suggesting either many have cleaned up their act or they’re not being realistic about how much they’ll be tempted to overspend. 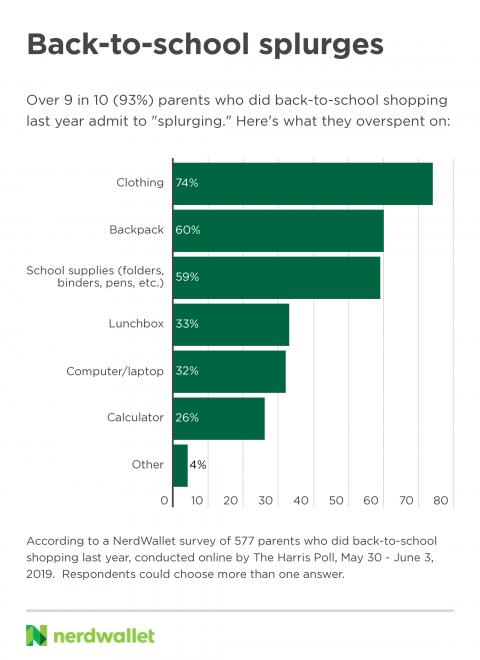 Back-to-school shopping tip 2: Make a realistic budget and plan. If you know you “always” splurge this time of year (42% of parents say they do), or believe it’s likely, set a budget that accounts for this. Give yourself wiggle room to buy a few splurge items, but rein in spending on things you can get at a bargain price. If you’re completely honest with yourself, and you know you’ll spend more than you have, begin saving for back-to-school shopping like you do for holiday shopping or any big purchase.

“It’s better to set a slightly higher budget than it is to feel guilty about overspending, or worse, to have to rearrange your finances to account for unplanned splurges,” says Sheehy.

Price-matching, or asking retailers to beat competitor prices, is an underused practice that can pay off big. Within the past year, 28% of Americans say they haven’t price-matched at all. Parents with children under age 18 are more likely to have price-matched (83%) vs. those without (66%).

“Price-matching takes comparison shopping to the next level,” Sheehy says. “It does involve a little more work, but the potential reward is savings above and beyond what you’ll find in sales flyers or emails.”

Back-to-school shopping tip 3: Make comparing and matching prices a habit. Apps such as ShopSavvy or ScanLife make it easy to compare prices while you’re in the store. Compare prices on exact products across retailers; then ask a clerk or check store websites for price-matching policies. These policies vary widely from retailer to retailer. For example, Target and Staples have generous price-matching policies, but Amazon doesn’t price-match at all.

Of those parents planning to do back-to-school shopping this year, about half (52%) will put their purchases on a debit card and 38% will use cash. These methods are far preferable to racking up debt you can’t immediately pay off, but if shoppers can pay cash, they could likely earn rewards on their purchases just as easily.

Just under half (45%) of parents planning to shop will use a credit card.

Back-to-school shopping tip 4: Get paid for your spending. Use a credit card that earns rewards, such as points or cash back, to make your back-to-school spending work for you. But don’t let interest eat into your benefits.

“You can use a rewards credit card to maximize your back-to-school shopping and earn points or cash back to put toward next year’s summer vacation,” says Sheehy. “Just make sure you can pay the balance off each month. If you don’t, interest charges will quickly eat away at any benefits the card offers.”

Summer ultimately leads into the school year, but that doesn’t make it the best time to do all of your back-to-school shopping.

Two in five parents (40%) who do back-to-school shopping say they wait until July to start, and 36% wait until August. Just 8% say they purchase school items for the upcoming school year throughout the year.

You may capture some sales by waiting for summer to buy items for the school year — especially if you wait until just before school begins — but you could also overspend by purchasing everything in the same month.

Back-to-school shopping tip 5: Time purchases throughout the year. Many states have sales tax holidays that coincide with back-to-school — check your state’s dates on the website of the Federation of Tax Administrators. Take advantage of the savings on these days, but don’t feel like you have to buy everything for the entire year in one go. Fall and winter clothes, for example, will likely be cheaper a few months after school begins. 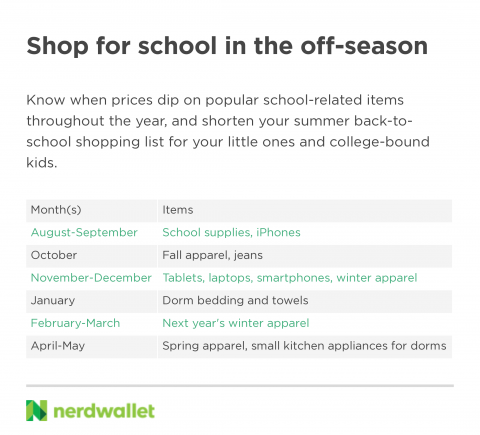 »MORE: What to buy every month of the year

This survey was conducted online within the United States by The Harris Poll on behalf of NerdWallet from May 30-June 3, 2019, among 2,010 U.S. adults ages 18 and older, among whom 595 are parents with kids in kindergarten through 12th grade or college. This online survey is not based on a probability sample and therefore no estimate of theoretical sampling error can be calculated. For complete survey methodology, including weighting variables and subgroup sample sizes, please contact Jessica Ayala at jessica@nerdwallet.com.
Elizabeth Renter is a writer at NerdWallet. Email: elizabeth@nerdwallet.com. Twitter: @elizabethrenter.